Today, Floodwaters and Flames: The 1913 Disaster in Dayton, Ohio author Lois Miner Huey talks to Millbrook Press editor Carol Hinz about the book in particular and children’s nonfiction in general. 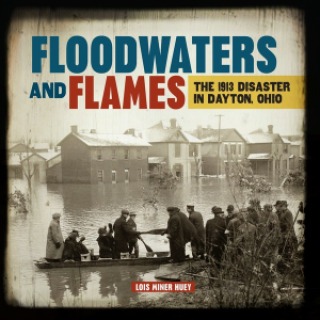 Carol: I never heard about this massive 1913 storm and flood before you send me the proposal for this book. Where did you find out about it?

Lois: The first time I heard of it was at my historic preservation office. The State of New York had rehabbed an old factory building for us. Outside on a brick corner were several black dashes, each with a date next to it. The highest one was labeled 1913. Since I stood on a tall loading dock with a big parking lot, a grassy bank, and a flat area overlooking the river behind us, I was astonished. I’d never heard of this flood, either. I kept it in mind, though, and eventually decided to research this largely unknown happening.

I prefer writing about “forgotten” history, but this flood story was really obscure. What drew you to this enough to put it into print?

Carol: Stories that can be classified as “untold stories” have an upside and a downside. The upside is that a story that hasn’t been told before for kids has a nice, built-in marketing hook and can stand out from the crowd. The downside is that no one has heard of it!

That said, it’s no secret that children love disaster stories. So you take an untold disaster story and then add in characters including a Negro Leagues ballplayer who becomes one of the heroes of the flood, Orville Wright, and a librarian who bands together with others stranded in the library—how could I not fall for this book?

You tell the story of the flood day by day, chronicling the activities of a cast of characters in Dayton. I’m curious how you found the stories of the specific people you featured in the book. Related to that, was there anyone you were hoping to include who you didn’t have room for or didn’t have enough information about?

Lois: My husband and I flew out to Dayton to do research in the city library where they have massive files left by people who experienced it. There were so many stories that I had a hard time choosing which ones to use. Finally, I settled on [who to include], but I had to leave out so many stories of how the rescuers managed to help others and how people were reunited with missing family that it really pained me.

Carol: What was the most surprising thing you discovered in your research?

Lois: When I began the research, I quickly realized that Dayton had become the symbol of [the whole flood], much as New Orleans became the symbol of Hurricane Katrina. My original plan was to talk about all the happenings in the Midwest and Eastern states, but that had to change. The storm was just so widespread that  I could only mention the problems it caused across the rest of the Midwest and the East. This is an example of how things change once you begin the research!

I enjoy knowing how things work. Once you decided to publish this, what was the process of interaction between you and the image/layout staff especially in regard to what images to use?

Carol: We are so fortunate at Lerner to have our own photo researchers on staff. So after a book’s editor reads through the text a couple of times, the editor makes a “wishlist” of desired photos. This can sometimes include images in other books, but it’s often also images that might hypothetically exist. Here is an example of some of the entries on the wishlist for Floodwaters and Flames, which editor Jenny Krueger created:

Once the wishlist for Floodwaters and Flames was ready, photo researcher Giliane Mansfeldt took over, looking in large databases (such as Corbis and Getty) as well as contacting organizations with a specific connection to the book’s subject matter. In this case, the Dayton Metro Library was a major source of photographs.

The photo researcher organizes the images by topic or by chapter and then shares them with the book’s designer and production designer. For this book, the designer was Emily Harris and the production designer was Martha Kranes. After the text is flowed into the layout, it’s often the production designer (sometimes working with the editor), who makes preliminary selections to match images with text. The designer then reviews everything and makes sure the images convey sufficient drama and visual appeal along with coordinating well with the text. And then the editor has a chance to take a look and start working on photo captions. After that, the layout goes to the author for further input and tweaking.

So basically, this was a very long way of saying: it’s a team effort!

Lois: I’ve had both an agent and an editor tell me they don’t “‘do” nonfiction because they can’t know enough about subjects to make a judgment. What do you think about their stance?
Carol: Well, I don’t edit novels because I wouldn’t have the slightest idea what to do with them. I can’t handle the idea that anything could happen—there are just way to many options! I think it comes down to the fact that different people are wired in different ways and we all need to play to our strengths.

I love nonfiction for kids—I think the range of subjects covered is fascinating, and I am always trying to get my hands on some new exciting title that I’ve heard about. I follow children’s nonfiction authors and nonfiction-loving librarians on Twitter, and I never miss the Nonfiction Picture Book Wednesday roundup at the Kid Lit Frenzy blog. Because nonfiction surrounds me all day long, it’s what I’m most comfortable editing.

That being said, I know I don’t have enough knowledge to edit in isolation. Often the authors I work with have experts they’ve been in touch with while researching a book, and the experts review the text to vet it before publication. For a book like Ebola: Fears and Facts, the author, Patricia Newman, and I were aware that the book had a lot of statistics and the information was constantly changing, so we decided to hire a freelance fact-checker to review everything in that book. Other times, I’ll reach out to a professor or other subject-matter expert if I feel like a book would benefit from a review by someone with that level of expertise. So much like with my answer to the photo question above, it’s all about having the right team in place to make everything the best it can be!
Thank you for these thought-provoking questions, Lois!
Pick up Floodwaters and Flames at your local library today!

In fall 2019, we released A Map into the World by Kao Kalia Yang. In this heartfelt picture book, Kalia and illustrator Seo Kim tell the story of a young Hmong girl who experiences the cycle of the seasons as well as the cycle of life, welcoming twin baby brothers along with watching her across-the-street neighbor Bob grieve the death of his wife, Ruth. The character of Bob was based on Kalia’s real-life neighbor Bob, an unassuming man in his early 90s who certainly never imagined he’d one day be in the pages of a children’s book.

It is with much sadness I share the following remembrance, in which Kao Kalia Yang says a final goodbye to Bob.

END_OF_DOCUMENT_TOKEN_TO_BE_REPLACED

I hope everyone reading this post is doing well in these strange and sometimes scary times. My two kids–O., age 9, and M., age 6–had spring break in mid-March, followed by an additional week off. I interviewed them for the blog back in 2017, and I thought it would be a good time to check in with them about their experiences these past couple of weeks. END_OF_DOCUMENT_TOKEN_TO_BE_REPLACED

John Coy and Natalie Capannelli’s new picture book, If We Were Gone: Imagining the World without People, is not your average picture book. In a review, Publishers Weekly called it a “disturbingly beautiful dystopian meditation.” When John, Natalie, art director Danielle Carnito, and I were working on the book, we certainly didn’t imagine that it would be released just as a global pandemic was spreading. The book’s launch party, which was scheduled for this past Saturday, was canceled, and our foremost concern is that everyone do what they need to do to take care of themselves–and to help those who need it.

If you’re curious about how If We Were Gone came to be and what sort of reactions students have had at school visits, author John Coy shares the story here. END_OF_DOCUMENT_TOKEN_TO_BE_REPLACED

Thank a pollinator! This STEM Tuesday posted by Fr

Need to set the real world aside for a while? Here

What's more American than voting? Tune in to hear