Special thanks to digital intern Amy Richardson for the following post!

In my college-level computer science courses that I took just four years ago, there were three females out of about thirty students. This makes some sense, considering that while women are increasingly choosing to pursue careers in science, technology, engineering and mathematics (STEM), these fields have historically all been dominated by males. Any females that were involved in STEM in the past have typically been overshadowed and underappreciated due to their male counterparts. Now, brilliant women such as Katherine Johnson, Mary Jackson, and Dorothy Vaughan are starting to gain recognition for the impact they made on STEM over half a century ago. The 2016 film “Hidden Figures,” which showcases the intelligence, persistence, and courage of these three African American women working for NASA during the 1960s, was an instant hit upon its release in early January and is nominated for Best Picture at the Oscars coming up on Sunday, February 26th.

The popularity of this film along with the upcoming Oscars provides an opportunity to learn more about women that have impacted STEM. Several women are featured in the STEM Trailblazer Bios series, ranging from computer scientists, engineers, and astronauts. In this series, young readers (ages 7-11) will learn about some of the key figures in STEM, including their remarkable accomplishments in their field and significant details in their life that led them to a career in STEM. The stories are engaging, impressive, and could even inspire readers to consider working in STEM in the future. The women portrayed in “Hidden Figures” helped pave the way for new generations of gifted women to work for NASA, and the following titles are a great start to expanding your knowledge about women who have made stellar contributions to space exploration:

Mae Jemison’s childhood dreams revolved around someday being in outer space like the characters on her favorite show, Star Trek. In 1992, she fulfilled those dreams by becoming the first female African American astronaut. While working for NASA, Jemison and her team conducted experiments that helped us better understand space and how it affects humans. “Astronaut Mae Jemison” by Allison Lassieur reveals the details of Jemison’s life that led to her achieving her dream of becoming an astronaut, along with providing intriguing information about the history of space travel and Jemison’s numerous accomplishments, both with NASA and in other areas of science.

Diana Trujillo grew up in Cali, Colombia, which is where her fascination with space began. At the age of eleven, she promised herself that she would someday combine her love for math and her love for art to become an engineer for NASA. In “Mars Science Lab Engineer Diana Trujillo” by Kari Cornell, readers discover how Trujillo achieved her goals despite having to overcome obstacles such as moving to a new country and learning a whole new language. They will also learn more about aerospace engineering and, more specifically, NASA’s time experimenting on Mars.

Aprille Ericsson grew up in Brooklyn, New York where she began to consider a future career with NASA. Her path to becoming an aerospace engineer was not easy; it required a lot of dedication and hard work. She noticed that there weren’t many other African American women that pursued careers in science, but she didn’t let that deter her from her passion. “Aerospace Engineer Aprille Ericsson” by Laura Hamilton Waxman describes Ericsson’s inspirational journey from living in a poor neighborhood as a child to becoming one of NASA’s top engineers. Readers will also be informed of Ericsson’s accomplishments in her field, which have helped scientists begin to answer some of the most complicated questions involving both outer space and our own planet, including questions having to do with black holes and global warming. 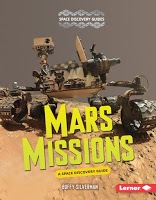 The women in “Hidden Figures” have stories that prove that no matter who you are or where you come from, your persistence and hard work will help you achieve anything you set your mind to. Whether or not the film wins an Oscar on the 26th of this month, young readers will hear this message loud and clear through Lerner’s STEM Trailblazer Series.
If these titles spark further interest in the exploration of outer space, readers (grades 4-6) can dive into Lerner’s Space Discovery Guides series to learn more about the most recent scientific research and discoveries related to space. The fascinating facts paired with incredible photography featured in these titles will amaze anyone who is curious about the universe beyond our planet.