Special thanks to Spencer Hanson for the following post!

Many pet owners have witnessed the phenomenon of their animals displaying odd behaviors, which sometimes includes emulating their owners or even their furry peers. Half the internet is dedicated to chronicling this. We’ve all heard it said that cats think they are human, and humans have been observed to refer to them as their “children” and even going as far as dressing them. My sister would stuff the family cat into American Doll clothing. The cat was not amused. Other pet owners will detail what’s new with their dog in their Christmas card and have their hound front and center in the picture wearing reindeer antlers. The confusion of identity goes both ways and sets the stage for humorous situations.
The story of a guinea pig named Fido that behaves like a dog and goes mad for T-bone steak shaped dog treats is Lerner Digital’s unique entry into the boy and his dog genre. Many of us know and have experienced the “dog” substitution deal made between parents and their puppy enthusiastic children. This is the origin story of the Guinea Dog series, as Rufus, a young boy who wanted his own Lassie or Old Yeller, had to settle for a canine compromise. However, to everyone’s surprise the substitution puppy surpasses expectations and perceptions, as Rufus explains:
Fido is a guinea dog. I’d always wanted a real dog, but my fussy dad wouldn’t let me have one, so my unfussy mom bought me a guinea pig. To everyone’s surprise, it barked, begged, whined, fetched, obeyed commands, got fleas, and chewed up Dad’s shoes. In other words, it (she) acted like a dog.
This excerpt is from A Very Merry Guinea Dog, a short Christmas story written as a special addition to the Guinea Dog series. This digital exclusive eBook features the antics of Fido, as the guinea dog dutifully causes Christmas mayhem by ripping open gifts and knocking over the tree like any loyal hound is known to do. Author Patrick Jennings’ Christmas gift to Guinea Dog fans also serves as an entry point into the series for new readers. After enjoying A Very Merry Guinea Christmas, checkout the three full length Guinea Dog novels for more hilarity and stories of friendship. 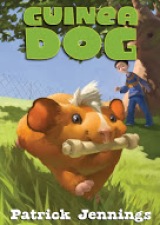 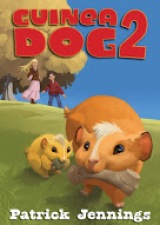 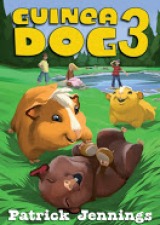