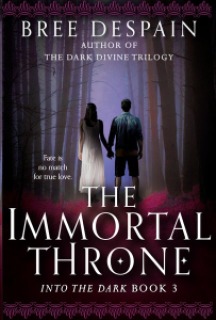 “Fate is no match for true love.”
That’s the concise teaser for The Immortal Throne, book 3 in the Into the Dark series by fan favorite Bree Despain, out now from Carolrhoda Lab. Oh, but how Fate will try–at every delicious plot twist.
From the jacket copy:

Daphne Raines knew it was risky to enter the underworld to save the love of her life, Haden, who had sacrificed his own honor as an Underlord for her sake. But she could never have predicted that she’d end up betrothed to Haden’s conniving half-brother, Garrick, new King of the Underrealm—and bound to his dark world.

Even worse, Haden is banished to the mortal realm, and has just days to live as poison takes over his body and mind. Only Daphne’s kiss can save him, but how can she escape Garrick and reach Haden in time? Surprises lurk around every corner in the final chapter of this epic romance story, as Haden and Daphne fight to fulfill their destinies.