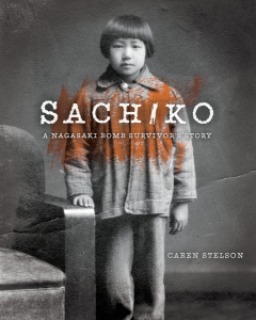 Caren Stelson is the author of Sachiko: A Nagasaki Bomb Survivor’s Story, which will be released on October 1, 2016. The book tells the story of Sachiko Yasui, who was six years old when an atomic bomb was dropped on Nagasaki where she lived. While Caren was doing research for Sachiko, she came across the following story.

In August 2012, I was in Nagasaki interviewing Sachiko Yasui about her memories of surviving the atomic bomb and her first impressions of American soldiers when they entered Japan after the war in 1945. I wondered if any World War II veterans back home in Minnesota had been first into Nagasaki as part of the occupying force. What would their stories be like?

Sitting in the Amdahls’ kitchen in the small, rural town of Lanesboro, Orval had described to me his wartime memories of Nagasaki—the mountains, the city’s deep harbor, the ash and twisted steel of a city destroyed by an atomic bomb. At the end of the interview, Orval stared at me, or perhaps through me, then pushed back in his chair. “Can I show you something?” he asked.

I looked at my watch. It was already late in the afternoon. I had a two-hour drive back to Minneapolis. “Sure,” I said.

Orval lumbered upstairs. Within minutes, he came back to the kitchen, holding in his big hands a four-foot-long sword, a war souvenir Orval had brought back from Japan. He pulled off the worn leather sheath. Shards of bright light bounced off the sharp steel blade. Orval said in a low voice, “I’ve been oiling this sword for 67 years.”

I looked to Orval, and then to the sword. A wooden surrender tag dangled from the scabbard. On the front of the tag were Japanese characters written with brush and ink. Someone had told Orval the characters on the tag gave the name of the original owner and the address—Nagasaki.

“I want to give this sword back in peace with honor,” I heard Orval say.

A tingle went through me. I had a feeling I was stepping into a new story. “Maybe one of my Nagasaki friends can help,” I said. I took out my phone and snapped a photo of both the sword and the tag.

That evening back at home, I emailed the photo of the sword with the tag to my friend Fumiko in Nagasaki with a note, “Want a mystery?” After all these years, I doubted we’d have any success finding the original sword owner. But Sachiko Yasui’s story of war and peace hung over me. Sachiko would want us to at least try.

The next morning, less than 24 hours later, I received an email from Fumiko. She had found the family.

On September 20, 2013, a year after I interviewed Orval Amdahl, three hundred people, dignitaries, and friends filled an auditorium in St. Paul, Minnesota. Joining Orval and his family in the auditorium was Tadahiro Motomura, the son of the original sword owner, his wife, and two adult sons. They had flown from Nagasaki to St. Paul to personally thank Orval for taking care of the sword and to bring the sword home. As Orval Amdahl and Tadahiro Motomura bowed to each other, the audience rose in a standing ovation. Orval Amdahl passed the sword to Tadahiro Motomura. As I watched the two men embrace, I thought of Sachiko Yasui in her home in Nagasaki. Her story had inspired us to help the sword find its way back home in peace with honor. How I wished Sachiko could have made the trip to St. Paul to be in the audience, applauding with the rest of us.

For more coverage on the Return of the Sword, click on the following links to articles from MPR, the Star Tribune, and Minnesota’s CBS affiliate, WCCO.

One thought on “The Return of the Sword: Guest Post by Author Caren Stelson”

How are crayons made? How do farmers grow pumpkins

Today Ted Anderson, author of the new #YA #graphic