Making a book is always a team effort. But one particular book we’re releasing this fall, Sachiko: A Nagasaki Bomb Survivor’s Story, required teams on two continents for it to come into being. 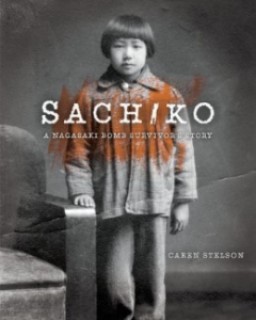 Author Caren Stelson first heard Sachiko Yasui speak in 2005, when Sachiko visited Minneapolis and told her story of surviving the atomic bombing of Nagasaki, Japan, at the age of six. Five years later, Caren traveled to Nagasaki to interview Sachiko. Caren did not speak Japanese, and Sachiko did not speak English. But thanks to Takayuki Miyanishi, president of the Nagasaki–Saint Paul Sister City Committee, they were able to communicate—and to record their conversations. Caren made four additional trips to Nagasaki to interview Sachiko and to spend time in the city, visiting key landmarks that were part of Sachiko’s story. And on those trips, a team came together to assist with communication and much more.
A key object in Sachiko’s story is a ceramic bowl. Caren had taken a snapshot of it on one of her trips to Nagasaki, but for the book, we needed a clearer photo shot from a different angle. Fumiko Yamaguchi to the rescue! She’s vice president of the Nagasaki–Saint Paul Sister City Committee. When the digital photo she emailed wasn’t sufficiently large, she mailed the prints of her photos directly to me. And she included an extra little surprise in the envelope: 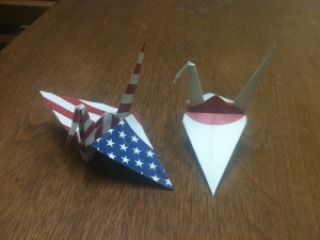 Under one wing of the crane folded from paper that depicts the Japanese flag is a handwritten note from Fumiko that reads, “Peace from Nagasaki.”  It was at this point that I started to get a sense of just how much Sachiko’s story meant to everyone involved in helping to make the book.

We had a team of helpers in the United States as well—including University of Minnesota Japanese language instructor Keiko Kawakami. She not only wrote out the terms in the book’s glossary in Japanese, she also advised on which writing system to use—hiragana, katakana, or kanji—and she spent an hour with me on the phone, a Japanese dictionary by her side, going over the pronunciations of all the terms in the glossary so that we could be sure they were accurate.
Within Lerner’s offices, we also had quite a group working on Sachiko. This included art director Danielle Carnito, production designer Erica Johnson, photo researcher Giliane Mansfeldt, and a whole number of other people who helped to ensure the words, the design, the photographs, and the printed books are all as good as they can be. A total of five different editors helped with tagging index entries so that we could run a script that puts in live links from the index to the appropriate page in the ebook edition. Danielle traveled to southern Illinois to go on press with the book in May, just to be sure the pages all looked as she intended them to look.
We were fortunate that Caren lives in Minneapolis, because that meant we could easily have meetings in person. After the book was in layout, Caren and I had just a handful of last little tweaks we needed to address, so she came to our offices one morning and we spent the next six hours working out these final little bits. (When a book is 144 pages long, there are more “final little bits” than you’d expect!) To be sure, this is not the typical way we finalize a book. But then again, this isn’t your typical book. It combines an intensely personal story with key events in world history—including World War II and the Cold War—and key figures such as Mahatma Gandhi, Martin Luther King Jr., and Helen Keller. We needed to be sure readers ages ten and older would have the information they needed within the pages to understand how these pieces all fit together.
I don’t often work on a book about a person who knows we’re creating a book about her. Sachiko read the book’s narrative text, translated into Japanese, to confirm its accuracy, but she also placed her full trust in us to present her story in a manner that would be accessible to an American audience. She seemed to understand that while the book is about her and we want to tell her story in a respectful manner, the book isn’t “for” her.
The whole team in Nagasaki has been eagerly following along as we get closer to having finished books. Late in May, Keiko, our Minneapolis-based translator, traveled to Nagasaki. We printed out the book’s cover as well as several spreads from the final layout and sent them along with her so that she could deliver them to Sachiko, who is now in a nursing home. The photo below, taken by Keiko, shows Sachiko along with Fumiko (who sent the photographs and the folded cranes) and two additional members of “Team Sachiko.”
When an author writes across language and across culture, it’s essential to work with others who speak the language and who know the culture intimately. For example, Caren spent an hour one evening talking with Hiromi Mizuno, professor of Japanese history at the University of Minnesota, about how the role of the Japanese emperor has evolved over the last 2,000 years because one paragraph about the emperor wasn’t right.
We could not have made Sachiko the book into what we wanted it to be without the help of everyone mentioned in this blog post—and many others, who are named in the book’s acknowledgments section. I feel so grateful to everyone who was involved, and I look forward to October 1 of this year, when the book will be released.
Speaking of the book’s release, there will be a launch party at Common Good Books in St. Paul on October 19. You can find more information about that event here.

Narrative Nonfiction reads like a novel, but the s

Dive into the world of spies with the new #nonfict

"A beautifully illustrated reimagining of the Bron