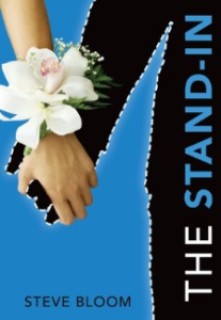 The Stand-In by Steve Bloom is set to hit the stores October 1st. It’s a hilarious rom-com, an antidote to some of the grimmer YAs out there, about blue-collar Brooks Rattigan, who becomes a stand-in date for the daughters of the elite who don’t have anyone to take them to the milestone parties of senior year. Brooks soon gets sucked into the world of privilege and perks, and starts cutting a few moral corners to be accepted by the one-percent crowd. Of course, because this is a funny book, with a hilarious protagonist, all turns out well, and Brooks ends up with the right girl on his arm.

I wanted to take the opportunity to interview the author, Steve Bloom, about the book, because it has such an unusual history.
First, Steve, how did the idea for this story come to you?
Years ago, I was playing tennis with an acquaintance of mine whose daughter was on a soccer team with my daughter. His daughter’s prom was coming up and she had her heart set on going but her date suddenly cancelled at the last minute. Her father asked if my daughter might know someone who could escort her instead. A loud bell went off that this was an idea worth writing about.
You initially wrote The Stand-In as a screenplay. What was the experience like of taking a screenplay and turning it into a book?
Challenging and liberating.
Challenging because I’d never written prose before and had to use new muscles I had to learn how to write new conventions, not to mention overcome some major insecurities. As a screenwriter, I’ve never perceived myself as a writer with a capital “W” which is how I think of book authors.
Liberating because the old rules I was used to no longer applied. Feature scripts are roughly 105-120 pages and fifty or so scenes long. Books have no set length. In screenplays, character is revealed through external action. Books allow you to go into your characters’ heads, to spell out how they’re thinking while they’re thinking it. There are no limits.
When you wrote The Stand-In as a book, did you make any significant changes?
Structurally not too much, but I was able to get to dig deeper into my characters and get to know them better.  I added about one third brand new material. Mostly I added more about the college admissions process, a target I’ve had fixed in my sights for awhile now, particularly after going through it all over again with my daughters.
The book is now in production to be made into a movie. Can you tell us a little about that?
Strange but true story.  Literally the week that I got the publishing deal with blessed Carolrhoda Lab for the novel — years after I had written off the script — I got an email out of the blue from the head of Awesomeness Films saying they wanted to option it. They have since purchased the screenplay and are currently in pre-production. So hopefully The Stand-In will be coming soon to a movie theater near you or at the very least to your nearest computer.
Thank you for your time, Steve! I absolutely adore the freshness of Brooks’s voice and the hilarious twists and turns of the plot, and find the ending completely satisfying. I’m excited that the book will soon get into the hands of readers!

Will we see you at ALA Annual this year? Stop by f

One more week until #ALAAC22! Don't forget to stop

Whether you're a teacher, bookseller, librarian, o

Who's ready for some awesome ALA panels? Join @cic