As an editor for Carolrhoda Picture Books, this work out well! I love how the accessible, engaging format of picture books can belie profound depth in the characters and stories they hold, as in this Spring’s Luis Paints the World. I love how illustrations bring text to life with humor and wonder, and especially how the interplay of text and illustrations can take the reading experience to a more complex level (say, when the art reveals sarcasm or an unreliable narrator). I’ve been so glad to see more teachers and educators sharing how they use picture books with upper-elementary groups to explore storytelling concepts at a more advanced level. But I also still treasure reading a picture book with a young child full of fascination and curiosity.

I recently had a chance to see the author and illustrator of Last Stop on Market Street, Matt de la Peña and Christian Robinson, speak about their Newbery Award-winning picture book at an event in St. Paul. (Thanks, Red Balloon, a fantastic indie children’s bookstore, for organizing!) Each spoke about the process of making the book, as well as about how their backgrounds led them to be interested in this story of CJ riding the bus with his grandma, wondering about the world along their journey. 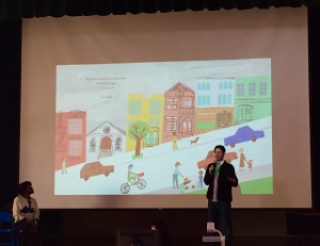 Both Matt and Christian have become kidlit rock stars, of a sort, with multiple award-winning and honored books under their belts. So it was especially fun to hear about the process of creating Last Stop and how, while the finished product is at the top of its class, it still started out with draft after draft of the manuscript. An idea was developed and then morphed significantly. The text was finished, edited, revised, then revised more, and it continued to be tweaked as the art developed through thumbnail sketches on Post-Its to character explorations to scenes to a whole book. The final art progressed through painting, collages of paper cut-outs, and an evolving combination of the two until each piece felt truly finished. Picture books are magical, in the sense of evoking wonder, but they are rarely if ever magically assembled.

Here’s Christian Robinson with some of his character explorations for Grandma and CJ: 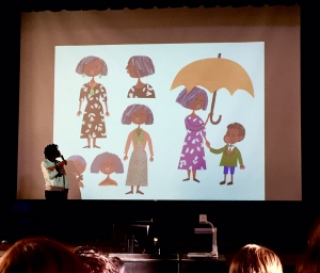 My favorite moment of their talk, though, was hearing Matt de la Peña explain that he wanted to write this book as a modern story that would serve a young, diverse audience–without focusing explicitly on issues of race. As he noted, among the vastly white-dominated world of picture books, many of the books that feature children of non-white backgrounds are historical stories about the Civil Rights movement, slavery, leaders and pioneers from non-European cultures. These books can be powerful, inspirational. But they are not enough.

The We Need Diverse Books campaign of the past few years is doing wonders to call out this imbalance in the market, and is prompting publishers to focus on creating books that serve as a mirror to the increasing majority of “minority” students in the United States. I’m thrilled to see books such as Last Stop earning acclaim, bringing the everyday, authentically told story of CJ and his wise grandma–and the relatable adventure of riding the city bus–to kids who look like CJ, kids who rarely encounter other kids who look like CJ, and everyone in between.

In Luis Paints the World, a Dominican boy in Lawrence, Massachusetts, struggles with his older brother’s departure for deployment in the army, creating a mural of their neighborhood universe to “see the world” as his brother is doing–and certainly to cope with his anxiety. The gorgeous painterly illustrations by Oliver Dominguez bring Luis and his Dominican community to life, while the story will resonate with any child who has turned to art as a form of expression, who has missed a loved one deployed in the military, who has had to say a hard goodbye, or who has felt frustrated by the lack of control over their life.

As a (co)creator of picture books, I want to see more like these! Diverse picture books can be lyrical or funny. They can feature animals and monsters alongside diverse humans. They can be urban-focused or not. Above all, they just need to be engaging and relatable, an entry point for kids of all backgrounds to identify themselves in books. Authors, please write more of these stories and send them to your agents! Agents, please send them to me.

Because I love picture books, and I want all young readers to have the opportunity to love them too.