1. Who inspired or encouraged you to write? 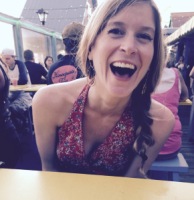 A few teachers really stick out: A high school teacher told me that I had some talent. He encouraged me to write simply and simply write. I liked how he called me out on flowery language that didn’t work, and said to stick to the basics: just tell a good story. I was lucky to have a professor in college who suggested that I do an independent study on fiction writing instead of taking a course. I said heck yeah, she handed me Bird by Bird by Anne Lamott, and I spent the rest of the semester writing YA for hours at a time. After learning about MFA programs, I got into the Stonecoast residency in Maine and the rest is history. The MFA changed my life. One particular instructor will always stand out—she has mentored me, critiqued manuscript after manuscript, introduced me to my amazing agent, and told me to never give up. Good thing I listened!

2. What are your favorite books of all time?

The Goldfinch, anything by J. D. Salinger, The Stand, It, Jane Eyre, the Chaos Walking trilogy, and Where the Sidewalk Ends.

3. What are you reading now?

I don’t know if I should admit this. I’m kind of embarrassed to be so behind the times. But…I’m reading the Harry Potter series for the very first time. I love it. It’s so comforting and engrossing, and before I go to bed at night I help myself fall asleep by walking the halls of Hogwarts in my mind. By the time I’m at Dumbledore’s office I’ve hit REM sleep. My boyfriend is reading it for the 50th time alongside me.

Working my glamorous full-time job as an editor at Vertex Pharmaceuticals (ha ha). Reading always. Hanging out with loved ones always. Eating good food always. Going to the movies, and watching my favorite TV show The Walking Dead.

5. What inspired Tripping Back Blue? Do you have a Finn in your life?

I started writing Tripping before I found out that my boyfriend at the time was doing drugs behind my back. It’s like I subconsciously knew. That boyfriend is not Finn [Tripping Back Blue‘s narrator] but some of the behaviors—the outrageous lying, the poppy seed tea, the addiction as the priority and the one true love—these were all things I became well acquainted with during that time. I’d say that Finn is an amalgam of a bunch of people I knew in high school. Stoners, drug dealers, wannabe hippies. I fell in love with some of them, became best friends with others…didn’t do a lot of drugs surprisingly!

Through these people I met a woman in her eighties who became a fairy godmother to us. She always had the best advice, was a great person to shoot the bull with over coffee at a diner, and even let us party at her cabin on Lake Champlain. I always knew I’d write about her. Then one day she appeared on the page, and that’s when I said hello to Orah for the first time.

Though adolescence isn’t exactly a stellar time for anybody, I’m obsessed with the issues that touch us when we’re young, vulnerable, and stupid; issues that carry into adulthood whether we like it or not. We’re all high schoolers at heart. Insecurities, gossip, bullying, heartbreak and ache that hurts like a mother. I’ll never get tired of writing about that stuff.

7. What are you working on now?

I was diagnosed with epilepsy five years ago. I have complex partial seizures, which aren’t the convulsive ones but the ones where I blank out for a minute and feel like I’m having an out-of-body experience. The seizures started when I was thirteen, and I had no idea what was happening to me. I thought I was schizophrenic, going crazy, or having a supernatural experience. That said, I’m writing about a teenage girl who can see the future through her seizures.

Thanks, Kara!
Pick up a copy of Tripping Back Blue at your local bookstore.

STEM has been a mainstay topic at Lerner for decad

DICTIONARY FOR A BETTER WORLD by Irene Latham and