Today, John Coy and Wing Young Huie, the author and photographer team behind Their Great Gift: Courage, Sacrifice, and Hope in a New Land, take over the blog! Their Great Gift has received starred reviews from Kirkus Reviews, School Library Journal, and Publishers Weekly. In this post, John interviews Wing, and in next week’s post Wing will interview John. 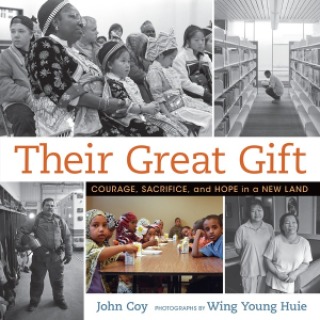 John: Let’s start with an easy one. What’s your memory of the two of us meeting?
Wing: I remember meeting playing pick up basketball at Bally Total Fitness sometime in the 80s. There were two courts that were informally known as the A and B courts and the best players played on A. We met on the B court. There were times, though, when we stepped up to the A court. Then I started playing with another basketball group that rented a church and invited you to play, which is still going some twenty years later. I think we’ve moved up to A court level!
John: You’ve made a number of books for adults. What was your first reaction to creating a book for children?

Wing: Well, I’m always up for something new. I don’t have children myself but have worked with schools of all grade levels quite a bit, using my photographs and photographic process of approaching strangers to learn about visual literacy and cultural assumptions. So doing a book especially for students is exciting.
John: What did you think when you saw the first draft of the text for Their Great Gift?
Wing: It evoked a lot of emotions for me, as everyone in my family, my five siblings and both parents, emigrated from China while I, the youngest, was born in Duluth.

John: What was it like to read the text and then make suggestions on changes to the text?
Wing: I’ve never worked with a writer before on a book. For all my five books the text was written by me and included direct quotes from the people in the photographs. So the challenge for this was to have the text nuanced and complex to open the possible interpretations of the photos and the people in them. You were gracious in allowing me to make suggestions.
John: When you were selecting photographs, did you immediately have some in mind that you wanted for this book?
Wing: No. I combed through my extensive archive of thousands of images from over 30 years and selected about 150 photos and finally winnowed them down to the 66 in the book.
John: Since you have thousands of photographs to choose from, what process did you use for selecting the ones for Their Great Gift?
Wing: The old-fashioned way. I looked at contact sheets with a magnifying loupe. All of the photos in the book were taken with film, which were processed in a darkroom (most of them by me) and then “contact” printed with a roll of 36 images on one sheet of 8×10 inch photographic paper. We didn’t call them thumbnails back then.
John: How did you decide between black and white and color photographs?
Wing: I was aiming for a balance of the two but not a specific ratio. Most of my early and middle work is b&w so it ended up about a third of the book is in color.
John: What was it like to go to Muscle Bound Bindery [Lerner’s company bindery] and see the book being made right before you? What did if feel like to be handed a copy of Their Great Gift right off the line?
Wing: Definitely a memorable day going there with you and seeing the fruition of our efforts! As I said I am not a parent, but this is the closest I get!
John: I’ve saved the most important question for last. Would you like to make another book together?
Wing: Absolutely!
Thanks, John and Wing! Come back next week to read Wing interview John.

Don't miss these Spring 2021 favorites from our di

May is Asian American and Pacific Islander Heritag

Happy Book Birthday to our May releases! 🎂🎉

We are honored to see two more starred reviews for