It’s Free Book Friday! This week, enter to win two graphic novels! We’re giving away The Other Side of the Wall and Terrorist: Gavrilo Princip, the Assassin Who Ignited World War I. 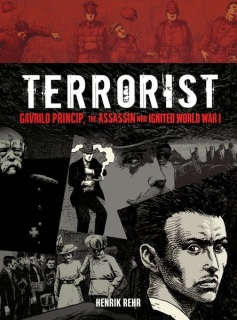 Simon Schwartz was born in East Germany to political dissidents. His striking graphic novel memoir The Other Side of the Wall chronicles the family’s difficult journey to get to the other side of the Berlin Wall.

In 1914, a young Serbian named Gavrilo Princip assassinated the Archduke Franz Ferdinand of Austria―a violent act that sparked World War I. Terrorist, Henrik Rehr’s riveting graphic novel, imagines the events that led Princip to become one of history’s most significant terrorists.
If you’d like to win both of these stunning books, please leave a comment on this post (including your first and last name), or tweet this line: “Free Book Friday! Tweet to win THE OTHER SIDE OF THE WALL and TERRORIST from @LernerBooks.  bit.ly/1OrSN“
We’ll announce the winner on Friday, May 8, so check the blog then to see if you’ve won!

From the creation of the universe to a comical bea