First, congratulations to Michele, who’s won The Bunker Diary! Email publicityinfo@lernerbooks.com with your address and we’ll get your book in the mail.

And now for an Egmont update…

It’s been a crazy past few weeks for us here at Lerner! On February 25, we announced via this press release that we had purchased around 100 titles from Egmont USA, including the twelve final titles that were due to be released this spring. 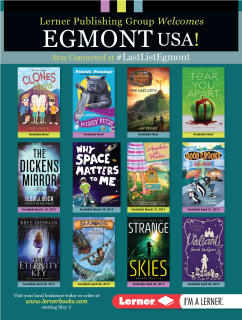 The authors of ten of those books have been engaging in a tour de force social media whirlwind. If you don’t know what I’m talking about, type in #LastListEgmont into your Twitter search feature and feast on more than 100 guest posts, reviews, interviews, and advice columns (Sarah McGuire’s Things to Remember When You’re Facing a Giant comes to mind).

Last week Monday, March 2, the Last Listers, with the help of Cuddlebuggery’s Kat Kennedy, embarked on a 60+ post blog takeover. All of the posts can be found on the Egmont’s Last List Tumblr account here.

The Last Listers also interviewed each other on Teen Librarian Toolbox last week.

Each day, more #LastListEgmont goodies pop up; for example, earlier this week, Matt Myklusch talked to Ilsa J. Bick (whose book The Dickens Mirror was released on Tuesday) about publishing, differences between imprints, and the double-edged sword of talking to fellow writers in this fascinating podcast.

Plus, boxes of Egmont titles appeared in the office this week! We’re all so excited to read the backlist and better acquaint ourselves with our new Lerner books. Welcome, Egmont USA!

From the creation of the universe to a comical bea