Congratulations, Jennifer! You’ve won The Cryptid Files series! Please send us a DM on Twitter or an email to publicityinfo@lernerbooks.com with the subject line “Free Book Friday” and tell us your mailing addresses so we can get your book in the mail.
This week, enter to win E. K. Johnston’s The Story of Owen, a YA alternative history novel described by The Horn Book Magazine as “nothing short of epic.” The book, set in small-town Canada and told from the perspective of Siobhan, a young bard-to-be, will enchant YA readers of all ages.

Listen! For I sing of Owen Thorskard: valiant of heart, hopeless at algebra, last in a long line of legendary dragon slayers. Though he had few years and was not built for football, he stood between the town of Trondheim and creatures that threatened its survival.
There have always been dragons. As far back as history is told, men and women have fought them, loyally defending their villages. Dragon slaying was a proud tradition.
But dragons and humans have one thing in common: an insatiable appetite for fossil fuels. From the moment Henry Ford hired his first dragon slayer, no small town was safe. Dragon slayers flocked to cities, leaving more remote areas unprotected.
Such was Trondheim’s fate until Owen Thorskard arrived. At sixteen, with dragons advancing and his grades plummeting, Owen faced impossible odds—armed only with a sword, his legacy, and the classmate who agreed to be his bard.
Listen! I am Siobhan McQuaid. I alone know the story of Owen, the story that changes everything. Listen! 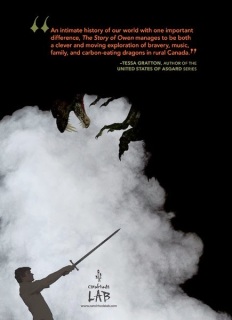 Did we mention it would be a great book club pick? Click here to download a free discussion guide for this phenomenal story filled with adventure, friendship, and snappy one-liners.
If you’d like to win The Story of Owen, please leave a comment on this post (including your name), or tweet this line: “Free Book Friday! RT to win THE STORY OF OWEN by @ek_johnston from @LernerBooks & @CarolrhodaLab bit.ly/1OrSN #yalit “
We’ll announce the winner on Friday, May 23, so check the blog then to see if you’ve won!

One thought on “Free Book Friday: The Story of Owen!”