Let’s have a round of applause for Cindy Reyes! You’ve won a copy of Miracle Mud: Lena Blackburne and the Secret Mud That Changed Baseball from Millbrook Press. Email us at publicityinfo@lernerbooks.com with the subject line “Free Book Friday”, your mailing address, and any other expressions of enthusiasm you’d like to share, and we’ll send you your prize forthwith. We trust you’ll share it with boys and girls who are looking for a fun story about the surprising ways in which dreams can come true.

Our baseball fever continues with Something to Prove: The Great Satchel Paige vs. Rookie Joe DiMaggio. This new picture book from Carolrhoda Books is another inspiring true story that’ll captivate even the less-than-sports-crazed readers in second- through fifth-grade classrooms. (Side note: it’s one of my personal favorites, and you’d have to drag me kicking and screaming to a Twins game.) 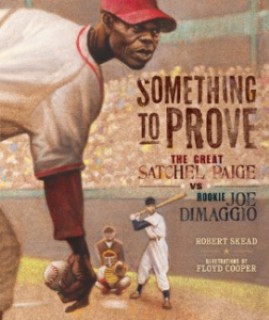 Before Joe DiMaggio was a household name, he was a 21-year-old rookie hoping the New York Yankees would take a chance on him. The team’s managers thought he was promising, but they weren’t sure he was ready for the big leagues. So they decided to test him against the best pitcher they knew–the legendary Satchel Paige. Paige was a recruiter’s dream…except that, in 1936, African Americans still weren’t allowed in the major leagues. Paige, heading up a team of amateur African American players, faced off against  DiMaggio and a team of white major leaguers in a game that made history–and gave both DiMaggio and Paige a chance to prove their worthiness as baseball players.

For a chance to win Something to Prove, leave a comment on this post, name included, or Tweet this line:
“Free Book Friday! RT to win SOMETHING TO PROVE from @LernerBooks. bit.ly/1OrSN.”

The winner will be announced in next week’s Free Book Friday post, so check the blog on April 5 to end the suspense. Some of the suspense, at least. To learn the outcome of the game, you’ll have to wait to read the book!

22 thoughts on “It’s Not Opening Day Yet, But it IS Free Book Friday!”

#ClassroomBookaDay: Books about family and communi

"[T]his author is as resourceful and ingenious in

Watch the latest video on the Lerner YouTube chann