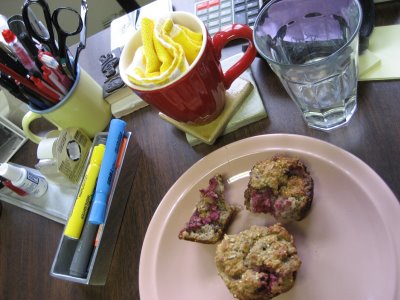 I started my career at Lerner Publishing Group as the company proofreader, way back in the early 1990s. The tools of the trade in those days were a red pen and lots of pencils. Okay, and some erasers too.

In the digital twenty-first century, as editorial director of the TFCB imprint, I’m at the computer most of the day. But, as you can see from this photo of a corner of my desk, I still need pens, pencils, highlighter markers, Post-it notes and tape, and even the occasional tube of correction fluid.

Behind my red coffee mug in the photo are a couple rubber stamps and an inking pad, which I use with staff like the old-fashioned system of good conduct stars. Remember those?

From company proofreader, I was quickly promoted to editor in what was then the Geography Department of the company. I cut my teeth editing titles in two of the company’s key anchor series: Hello USA (in fact, I’m the author of Arkansas and West Virginia in that series) and the Visual Geography Series (VGS). I took a brief hiatus to experience the self-help publishing world and came back to Lerner in 1999 as an editorial director—where, among many other series, I still work on VGS!

Catch my post next week for more about VGS, the most recognizable name in country series.

Oh, and those muffins in the photo? Raspberry bran. I have two every morning with tea at my desk.

We are honored to see UNSPEAKABLE by @caroleweathe

Today on the blog we talk with @nonieqa.ramos, aut

Learn how to help students grow as readers and as

Everybody should know their rights, including our

Help your students analyze the events of the past